Malefic Time is a story that was born in 1993. From the beginning twenty years have passed. During this time some images with small texts referring to it have appeared in several books, such as Dead Moon announcing its arrival. Until finally end in the project MALEFIC TIME, the main story of the adventures in this universe is composed of three books; APOCALYPSE, 110 KATANAS and AKELARRE.

The Malefic Time project (www.malefictime.com) brings us closer to a society suffering extreme degradation that has led to its almost complete collapse. The structures have been weakened or simply dissapeared. Vanished, from a social point of view, governments, media, market and social cohesion. In biblical terms the “Apocalypse” has arrived. This end of the world is not the result of any external threat, a cataclysm or anything uncontrollable by mankind, it represents the failure of the model adopted by humans to live. However, there are forces that have emerged in this time of chaos and desolation, and have turned the planet in their particular field of battle. The Solar and the Lunar have their own interest in the immediate future of human society, in addition to resolve their own ancestral differences.

It is a story that Allen “the American” has brought from 2038. Not everything can be enclosed in the pages of a single book. Therefore, this story took us in the first book to explore the APOCALYPSE and the years of survival in a grim and rusty New York, meetings and conversations with Shamash, whom many believe to be Archangel Gabriel, and angles lost in the old Pharaonic Egypt where a foreign princess, who reigned with the name of Nefertiti, brought an old tradition of ancestral worship to the court of the Nile. In CODEX: APOCALYPSE we make a walk on the clues that link the past and present. Later, the story has led us to Tokyo, its ghosts and the moon cult 110 KATANAS. Then we discover Paris, haunted by superstitions, in AKELARRE. It is also the domain of the Fallen Prince Nergal.

What awaits us can not be anticipated in just a few lines. You have to find out by yourself. These are the first lines of the three pictorial novels.

The country was as noisy as a roaring bull.
The gods grew troubled and peacelessly, (…)
Enlil had to listen to the noise too. (…)
The noise of humanity has become too big,
I lose sleep over the riots.
Give orders for the outbreak of surrupu (disease).

Atrahasis – Sumerian poem on the Creation and the Flood.
2nd millennium BC approx.

That morning in New York was covered in a golden cloud enveloping the silhouettes of those colossuses still standing, making them look blurred. There was little activity in those streets which had been busy and frenzied in days past. The few people who ventured outside did so in small groups, always on the alert for any incident. The human being had changed in these years of decadence and punishment. His survival instinct had wrought havoc not only in his way of life, but also in the moral and puritanism with which the millennium started.

That society, theoretic peak of the human being’s technological evolution, was now a long way away. The media, institutions, macroeconomics, politics, consumer society and their strings had all been engulfed by the past. Only a scant and fearful minority kept as it could the slightest traces of that way of life and its usages. They passed from the theoretical welfare society to one of irrational fear, to the obsession with anonymity, to the terror of the price of the decadence of a system capable of devouring itself. Nobody wants anything to do with anybody. Subsistence is the only thing that matters. 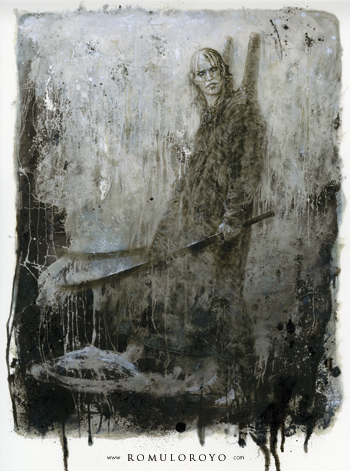 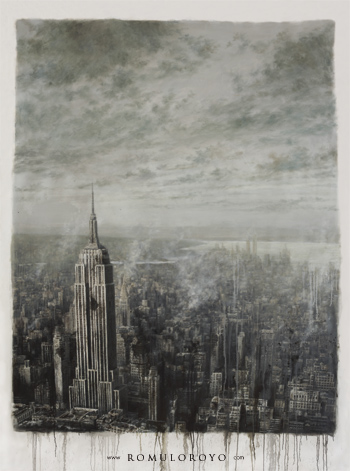 The great cleanup.
All the gods and Buddhas
piled in the grass
***
Weak
This night of snow
The lights of the palace
***
Meditates the monkey
over the night
How to catch the moon?

On a dark street in Tokyo …
Red robes covering women’s bodies, but these are no women. They clump on human corpses. Devouring them. Blood plunges by their avid mouths and their arms delve in the guts up to the elbows.
A tall figure, also of Woman, approaches backlit through a gallery decorated with a strange combination of Oriental and Celtic symbols. She remains a moment observing the scene. Her voice is irritatingly sharp.

-Enough you greedy gluttonous! We call too much attention. She, the flesh of the Moon, is here.

They all stop and turn their heads. Their bodies are pale with bony limbs. Their white, like milk, faces show through skin dark veins. 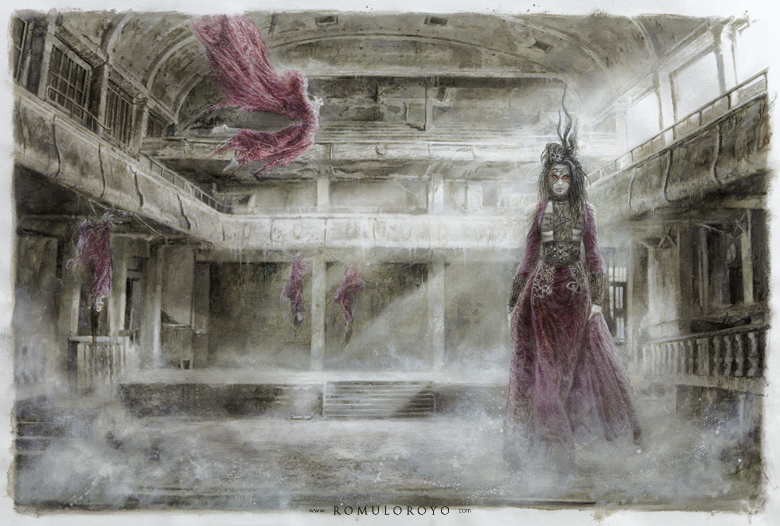 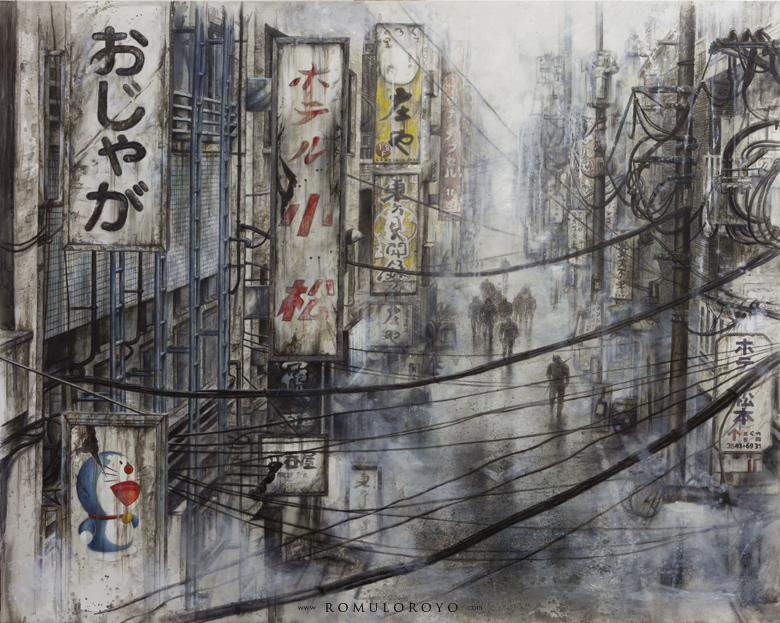 Spring, it is getting dark. Three hooded figures descend the narrow path that leads to the mouth of a great cave. They walk hastily and throw occasionally restless glances behind them.

They come to a corner of the large central hall of the cave. There lit a small fire and discover their faces. There is terror on them. Three women. Three young, terrified women because they know that they are being sought.
– We can’t go home. At least for a while. – We may never go back. They know we celebrate the fertile season. Attended from all corners of many kingdoms. Too many people, we have failed to hide it. I fear the worst. – Have you been followed? – I hope not.

There are more women there. Women set aside in the mountains, accompanied only by their knowledge of plants, of words, of spells. Women to whom consult or seek healing. Women that celebrate rituals to fertility, to life, to nature. 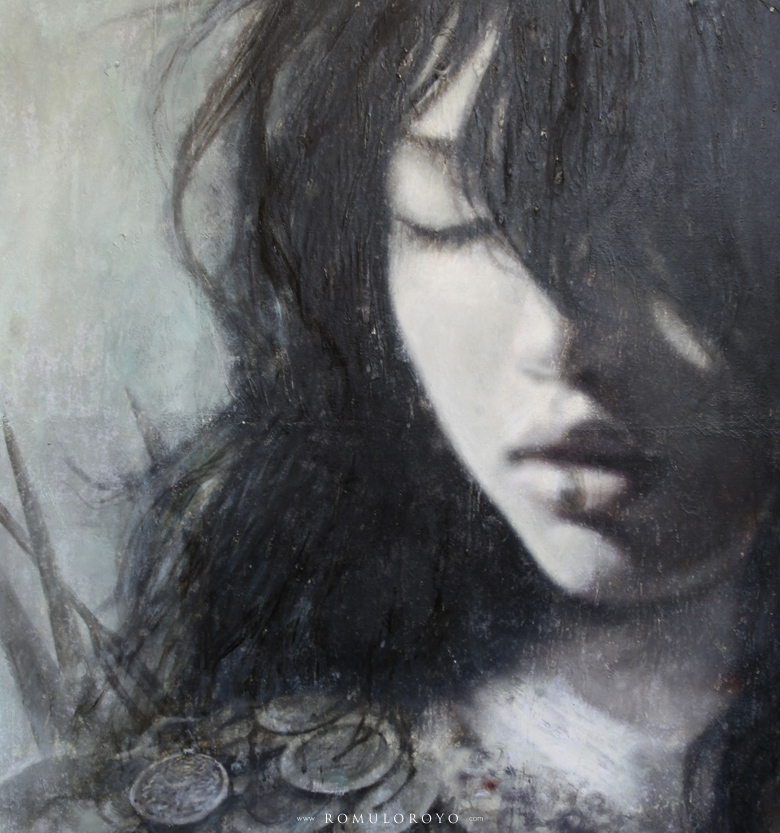 Smells like stew in the fire. The newly arrived dispose of their dark cloaks. They are served with food. Everything seems to calm down for a moment. They are women who practice the ancient arts, who can perceive future events through the wind. Who understand the language of animals and dialects spoken by unknown forest creatures. Women whose soul is filled with a nameless panic when they hear sounds around. Sounds of breaking branches are heard. They extinguish the fire, cuddle between them. They are terrified women who are found by the mob that seals the cave entrances. Women that scream when a battalion of hands rip them of the floor. Women who hear their sentence from the lips of a Dominican friar.

No public trial for those women or bonfires set on main square. The righteousness of man is primed with them right there. Humiliated, lynched by blind people. Right there are opened their bellies. Right there they are dragged leaving a trail of blood that soaks the earth. “For release of your immortal souls” they are warned by the friars to justify the act. Dying to be released. Condemned by the mobs torches to not suffer the eternal damnation. The cruelty as mercy. Blood for the pot. Women, shrieking.

Women, who die.Women, who are sacrified.Women they are, thirteen, are the stakes which are placed at the cave entrance.